Here at Mendeley we’re always interested in new ways that technology and social media can facilitate important research. Crowdfunding is one booming area that certainly brings those elements together, often in favour of some pretty awesome and worthy causes. So we thought we’d invite the folks at Indiegogo, the world’s largest crowdfunding platform, to highlight a research-based campaign that is making them excited at the moment. The one they came back with is called “we’re in this together” and broke the record for most successful health campaign in raising funds for world-class care and innovative research into Parkinson’s Disease:

By: Chelsea E.M. Kasai, Director of Development at the Parkinson’s Institute and Clinical Center

Two and a half decades ago, a dedicated group of Parkinson’s disease experts set out to create a better way to research and provide care for Parkinson’s disease. We would go beyond your standard doctor-patient relationship. Patients would become partners in developing their care plans, improving their quality of life, and discovering new strategies to confront and manage their disease. Compassionate care would work

hand-in-hand with cutting-edge research to seek answers, develop new therapies and treatments, and ultimately work toward a cure. Our result was the Parkinson’s Institute and Clinical Center.

We are always looking for new and creative ways to attract funding and further diversify our development portfolio. Caring for people with Parkinson’s does not fit neatly into today’s healthcare economics. It takes much more than an assembly line approach and 15-minute consultation to provide appropriate and impactful care. Philanthropy ensures that when it comes to care—no sacrifice is made and no corner is cut. Government and foundation research grants only cover a modest portion of the expenses associated with our Institute’s remarkable science. Philanthropy drives the pace at which our Laboratory and Clinical Researchers are able to pursue their work.

Crowdfunding both intrigues and excites us. Our Indiegogo campaign has allowed us to amplify donor investments, connect with and engage new supporters, and explore an innovative and cutting-edge vehicle for philanthropy, community building, and learning.

We know that when a loved one is living with Parkinson’s, the entire family is living with the disease. So for this very special campaign, we asked Bill Draper and his family to share their story with the world. We launched our Indiegogo campaign on #GivingTuesday with a $100,000 dollar-for-dollar match from The Draper Foundation. In less than 4 days we raised over $200,000. Our early campaign success inspired a second matching fund from Parkinson’s Institute Board Member Peter Nosler and his wife Julie Veitch. We’ve now raised over half a million dollars—Indiegogo’s Most Funded Health Campaign to-date.

In addition to Bill’s story and video, our campaign has featured his son Tim Draper, fellow venture capitalist, and founder of Draper University and the BizWorld Foundation; daughter Polly Draper, actress, writer, producer, and director; and granddaughter Jesse Draper, actress, and creator and host of The Valley Girl Show.

Campaign perks include Photo Prints from the Schuele Lab (Dr. Birgitt Schuele is our Program Director of Gene Discovery and Stem Cell Modeling), Virtual Research Updates with our best and brightest minds in science, and an Espresso and History Lesson with Dr. Bill Langston, Parkinson’s Institute Founder and CEO (Dr. Langston gained national and international recognition in the 1980s for the discovery of the link between a tainted “synthetic heroin” and Parkinsonism—MPTP).

More about the Parkinson’s Institute and Clinical Center

Parkinson’s Institute and Clinical Center is America’s only independent non-profit organization combining world-class care, Clinical Research, and Laboratory Research for Parkinson’s disease under one roof. By virtue of our design, we are uniquely equipped to provide the best care, accelerate promising science, and perhaps most important—integrate the two and everything in between. It’s what we now call Our Virtuous Circle and people living with Parkinson’s disease and their loved ones are at the center of all that we do. Learn more by visiting ThePI.org. 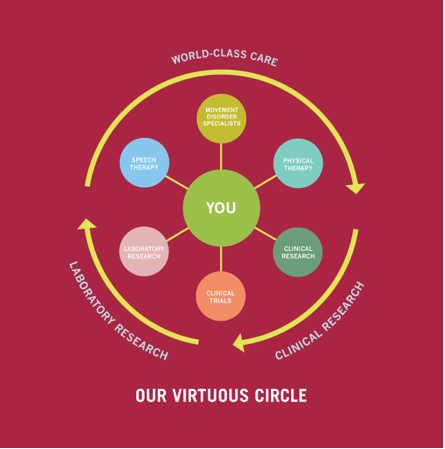 If you’d like to support this campaign, you can visit and share their page on Indiegogo. We’d also love to hear about your own experiences of crowdfunding your research, so either leave a comment below or join the discussion on our Crowdfunding group on Mendeley.