Stats is changing from being a private dashboard (only you can see) to being a part of your profile so that, as well as showcasing your work, your profile also shows the exposure and impact your work is having.

The features currently shown on the stats overview page will be shown in a tab in the profile: aggregated publication metrics (h-index, views, citations, readers), aggregated view and citation timeline and media mentions.

Just like now, you control who sees your profile, and this will include your new stats tab. Your profile is public by default, with an option to make visible to only your followers, and an additional option to restrict your followers to only those you give permission to.

Mendeley is integrating with ORCID, the Open Research Contributor ID non-profit, to bring your unique research identification to your Mendeley profile.

Since it’s launch in 2012, ORCID has issued over 2.5 million unique identifiers to help researchers keep the record straight on what work is whose.

The integration is already live — you can create or connect your ORCID ID with your Mendeley profile today!

You’ll can link your existing ORCID account or create a new one, and you’ll have a choice whether to import your ORCID profile information into your Mendeley profile.

For now, that’s a one-off import, but we are working with ORCID on how to keep your profiles in sync, so you don’t have to keep filling the same information in again and again.

Earlier this year we launched Mendeley Data, an open data repository where researchers from all disciplines can deposit their datasets. Because we want to support all fields of science, we allow all file formats, and are flexible in the kinds of metadata researchers have to provide. However, we still want to ensure that it is easy for others to find the data, access the data, and work with the data.

That’s where FAIR comes in. FAIR stands for Findable, Accessible, Interoperable and Reusable and is an approach for data developed since January 2014 by a wide range of scientific and research data organisations including the Dutch Techcentre for Life Sciences (DTL), and which Elsevier and Mendeley and others support strongly.

In the FAIR Data approach, data should be:

Community organizations and funding agencies are starting to recognize the importance of data being FAIR; for example the European Commission is providing researchers that receive funding through Horizon2020 with FAIR data management guidelines.

Mendeley Data wants to support researchers making their data available in a FAIR manner and so we’re delighted to be able to collaborate with the DTL, who are developing FAIR tools.

Last Friday developers from DTL joined the Mendeley Data developers for a Mendeley hack day. The goal for the hack day was to extend Mendeley Data API, to be able to expose the FAIR metadata, which allows researchers to discover datasets in Mendeley Data based on detailed metadata attributes.

The end goal is that a researcher using a FAIR-enabled tool can carry out a detailed search operation (for example search for datasets about a particular disease condition) and find relevant results from a range of repositories, including Mendeley Data.

This was enough to show the FAIR Data Point in action, starting off accessing Mendeley Data, and then drilling down into these example catalogues and from there finding the example datasets.

By the end of the hack day we had:

The outcomes of the hack day were: a much better understanding of how to make our datasets available as FAIR resources, so they can be found, integrated and reused by researchers along with other FAIR datasets; and creation of an endpoint which is only a few steps away from being productionised and available to use by the community.

“Pirate Politics” are on the march. The Pirate Party of Iceland tripled their representation in the October election. Many organisations, including the Mozilla Foundation, are clamouring for copyright reform to allow more data sharing. Is Open Data the wave of the future? What are the downsides? We are looking for the most well thought out answer to this question in up to 150 words: use the comment feature below the blog and please feel free to promote your research! The winner will receive an Amazon gift certificate worth £50 and a bag full of Mendeley items; competition closes January 11, 2017.

Pirates on the March

The Pirate Party of Iceland tripled their representation on October 29. Part of their appeal in a country as technology literate as Iceland may be their emphasis on open data and reform of copyright laws to allow the free sharing of information.

The Pirates’ success may be part of a wider reaction to the increasing restrictions afforded by copyright. For example, the tractor manufacturer John Deere recently argued in court that its ownership of the software in its vehicles extended beyond the point of their products’ sale. The Mozilla Foundation has also set up a campaign whose aim is to make copyright less stringent.

As cultural guru Stewart Brand said, “On the one hand…information wants to be expensive, because it’s so valuable…on the other hand, information wants to be free because the cost of getting it out is getting lower and lower all the time.” Is the future of data open? What are the positives and negatives of a more open paradigm? Tell us!

Our Brainstorms are challenges so we can engage with you, our users, on the hottest topics in the world of research.  We look for the most in-depth and well thought through responses; the best response as judged by the Mendeley team will earn a prize.

TURNER, Fred (2006). From Counterculture to Cyberculture: Stewart Brand, the Whole Earth Network, and the Rise of Digital Utopianism. Chicago: University of Chicago Press. 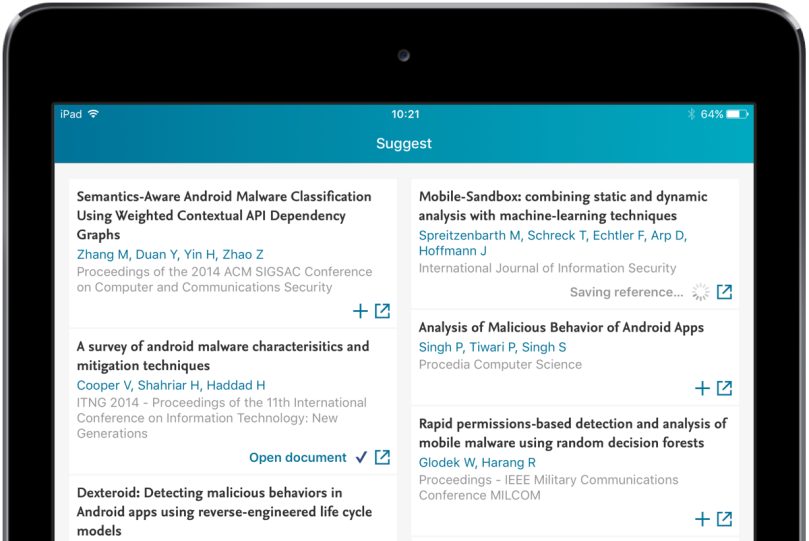 Did you know you can access your Mendeley library on your mobile and tablet? I often ask users, like yourself, this question and more often than not, people are surprised. Once in a while, someone tells me they would love to use our app, but are concerned about using too much storage space. When you try Mendeley for your mobile, you will discover you don’t have to worry about this. You choose what PDFs you keep on your mobile device, and the rest of the library will consist of your metadata only.

We’ve just launched a few exciting new features that make this the perfect time to get the app (if you don’t have it yet!).

When a friend or colleague tells you about that amazing new paper you absolutely must read, I hope the first thing you do is add it to your Mendeley library. Staying on top of new (and established) research in your field is tough, with so much being published every day. Our Mendeley mobile apps want to work alongside your friends, and also recommend content that you might be interested in. We’ve launched Mendeley Suggest on both Android and iOS, and this is where you can browse recommended articles that are based on the contents of your library. User feedback is incredibly important to us as we continue developing these features, so let us know what you’d like to see in the future!

You go to conferences to absorb new knowledge, see what is happening in your field, but also to network. Meeting people doing interesting research doesn’t end there, and with your Mendeley Profile you can open the door to meeting more of those people. We’re now making it easier to update vital information on your profile by letting you do it from the mobile apps. It’s always nice to have a face to a name, so take a photo and add it to your Mendeley profile straight from your mobile! 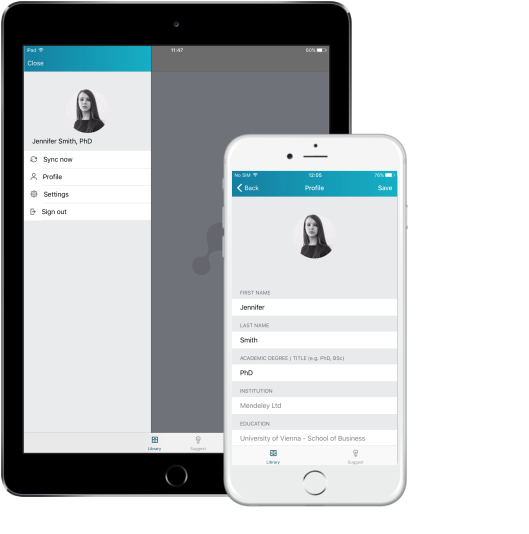 We’ve been, and continue to be, very busy in the mobile team. Both the Android and iOS app have seen new features and improvements since being launched. Sometimes these are under the hood, but sometimes they are visual. We’re working on improving our UI and as a consequence, always give you a better experience. If you’ve been using Mendeley on your mobile for a while, you’ll notice we’ve introduced some new colors and an improved navigation menu as well in the last release.

Christine is a product manager for mobile, covering iOS and Android apps. She loves all things tech and research, and you can chat with her directly on Twitter @christine_phd

Many thanks to all those who entered the Mendeley Brainstorm related to Climate Change; picking a winner given all the well thought out answers was not a straightforward matter, however in the end, we selected Vinisha Varghese’s (of the Indian Institute of Science (IISc), Bangalore) response:

The answer is slightly more complex than a simple yes or no. On one hand, the Paris Agreement is celebrated as the documentation of the human race’s first collective effort to combat the biggest threat in our (relatively young) species’ narrative – climate change. On the other hand, this hot-air balloon is constantly shot down as nothing but a mere ‘green-washing’ of white paper. The bottom-line is that the assessed carbon budget is not sufficient to limit warming to 2°C nor does it help the SIDS – who have conveniently been handed a raw deal. While we have put our faith in negative emissions by means of CCS – scalable technology that we are yet to invent, there have been paradigm shifts to more sustainable practices. Personally, I look optimistically at this deal to restrict warming to below 4°C. To sum up, it all depends on our actions in the next 10 years.

We asked her what inspired her. She responded:

I believe what really inspired me to be more vocal is the idea that researchers can influence positive behavioral changes in the masses. We have to make known to the world that there is still hope and that there are ways of reaching that envisioned future if we only act on them. We can no longer sit back and expect our governments and policy-makers to take care of things though – the need of the hour is collective effort. As an optimist and someone closely involved in the environmental field, expressing my opinion on a platform like the Mendeley Brainstorm was a subtle way of giving a ‘nudge’.

Hopefully others will take the hint. Vinisha also told us:

Once again, I would like to express heartfelt thanks for choosing me from amongst so many well-informed experts! It was challenging to keep my opinion within the word limit.This recognition is incentive to keep a researcher like me (so early on in her career) well motivated.

Those who didn’t win this time are encouraged to respond to the latest Mendeley Brainstorm, regarding Hacking and Online Security. Thanks again to all our participants.